In a few months, I’ll be stanning Shaj so hard I’ll be considering naming my firstborn after the song, but for the moment, I’m a bit out of the Fikmas spirit because a solid ethnobanger, Elvana Gjata, failed to conquer over a big-voiced power ballad. And Eurovision 2020 season opens with disappointment.

And I didn’t just like Me Tana because it slapped so hard. I mean, Gena also had a banger, even if he performed it with all the charisma of a bowl of Cream of Wheat. But Me Tana was special to me, because it was a banger about menstruation.

When I was looking at the FIKMAS entries on YouTube prior to the grand unveiling last night, the person I live with came into the room, saw a bit of Me Tana, and said, “This looks like a tampon ad.”

And I realised – they were right!

How often do we have period representation at Eurovision? Never? That’s right. Never. I mean, for something that’s a lot more common than peace, you’d figure that it deserves at least ONE song. And fortunately for us, Elvana Gjata was brave enough to bring us the banger that every person with a uterus needs:

For those of you who don’t speak Albanian, let me translate this for you: 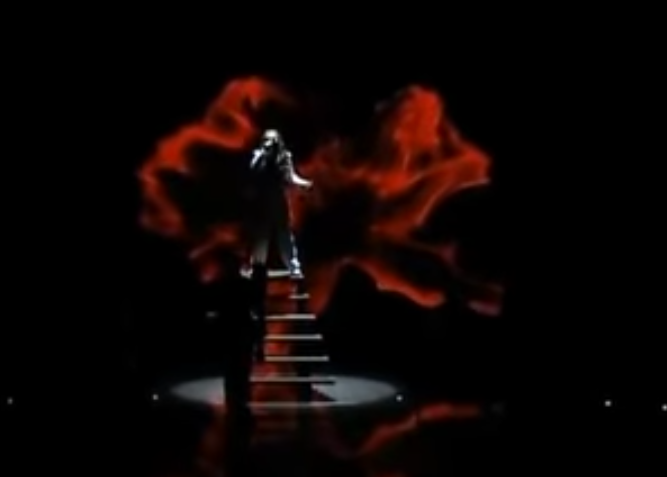 The beginning of the song, Elvana is irritated. “Me tana!” she wails. (That’s Alabanian for “My Aunt!” as in “Aunt Flo has come to visit.)

It’s that time of the month, and she’s beset by cramps and a headache, but has a lot of stuff to accomplish.

But some Ibuprofen and a Lilets later…

…Elvana is feeling great! Her period’s not going to stop her. She’s going to wear all white! Go to an aerobics class wearing a leotard that is maybe one size too small! Her bleeding’s not going to stop her, because she’s a modern woman in a sexy pantsuit who is ready to take on the world! You go, Elvana! Wave your hands in the air if it’s that time of the month! Be period proud!

My favourite bit is at the end, when, having successfully conquered another month of pain, Elvana and her backup dancers all joyfully remove the red rags from their pockets and dance in joy! Another month down! You can do this, people with uteri!

Seriously, with that reading, how on earth can someone in a baggy bondage suit with feathers compare? SJB, I hope you’re reading, and will revamp the hell out of Shaj to make it the empowering period anthem we’ve all been waiting for.