On Sunday, as I was eating a delicious vegan dinner*, my phone buzzed. I had received a DM from a source closely associated with Victor Crone. 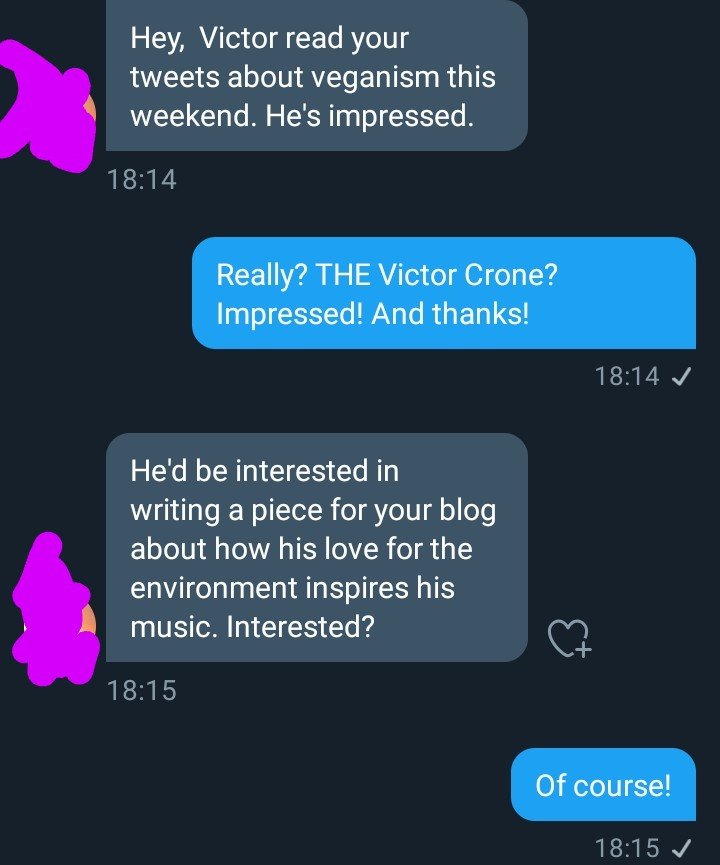 So here it is – a special guest post from Victor Crone:

Look, I know that you’re supposed to let the opinions of others flow off you like water off a duck’s back, but I keep my toe in the swirling Eurovision eddy of fan reactions.

I know what you all think of me: That I’m very good looking and yet also somehow one of the blandest Eurovision contestants of all time.

But I’m more than a hunk in an ice hockey jersey.  I’m more than an acoustic singer-songwriter who looks really good in a leather biker jacket. I’m more than the person who got into the finals at Eurovision 2019 with a song that is the aural equivalent of oatmeal – comforting, warm, and needing a bit of cinnamon to spice it up.

I’m a human, sharing the same ride with all of you on this big blue marble of Earth that we call home. (Note to self: Remember to title my next song Big Blue Marble.)

And the truth is, I’m not entering Eurovision for the fame or glory or chance to perform at sold out concert halls in Estonia with my BFF, Stig Rasta.

I’m entering Eurovision because I want to raise awareness about the climate crisis.

Listen, after my first Melodifestivalen, I had a bit of PMD – post-Mello depression. And I reached out to some other contestants to see how they handled it. One of them was Malena Erdman.

She invited me over for dinner, and I got to meet her entire family, her husband, Svante, and her two really bright daughters, Greta and Beata.

After dinner, over a plate of vegan semlors, Greta and I got into a deep conversation about the predicament the world is currently facing. Our actions have created a climate crisis, and we have a remarkably short window of time in which to fix it.

At first I was skeptical, but after hearing how global warming threatened to turn all of Sweden’s outdoor ice hockey rinks into soup, I was convinced. I’d like to be a parent, teaching my own children to crosscheck in our own backyard rink, but our selfish actions as a entire species were threatening to take that dream away from me.

So that’s why I wrote Storm, with lyrics like:

I mean, to me that was clear – we’re facing extreme weather events at the moment. Hurricanes and typhoons and record rainfalls and hail are pouring from the sky every single day. The evidence is right outside our windows!

And our chance to turn it around is right now, if we all make clear commitments to climate accords, work to tighten corporate regulation, and take personal steps to be better in our own consumption – like me. I only wear pre-owned leather biker jackets now (which, amazingly,  is also more comfortable, because they are also broken in. Who knew that saving the environment could feel so good?)

So I brought Storm to Eurovision in 2019, and expected to get peppered with tons of questions about the climate crisis. I mean, I spelled it out right there in the lyrics! But instead, somehow, I got caught up in discussions about representing Estonia instead of Sweden, and how I became best friends with Stig (ride or die, buddy!), and what I did to look so handsome in those leather jackets. In the hubbub, the climate crisis just kind of died away.

So this year, I resolved to do better, with my song Troubled Waters, a direkt to final qualifier in Melodifestivalen 2020. And again, I’ve been ever so clear about our need to address the climate crisis. I mean, the song has lyrics like this:

Because I will bring the world back home with this song about climate change. I, Victor Crone, hereby commit to spending every waking breath in my Eurovision 2020 tour making the threat of climate change known.

Anyway save the planet thanks.

*tofu scramble with vegan biscuits and gravy and a oat milk cappucino, if you must know. And yes, this is breakfast for dinner. SO WHAT?